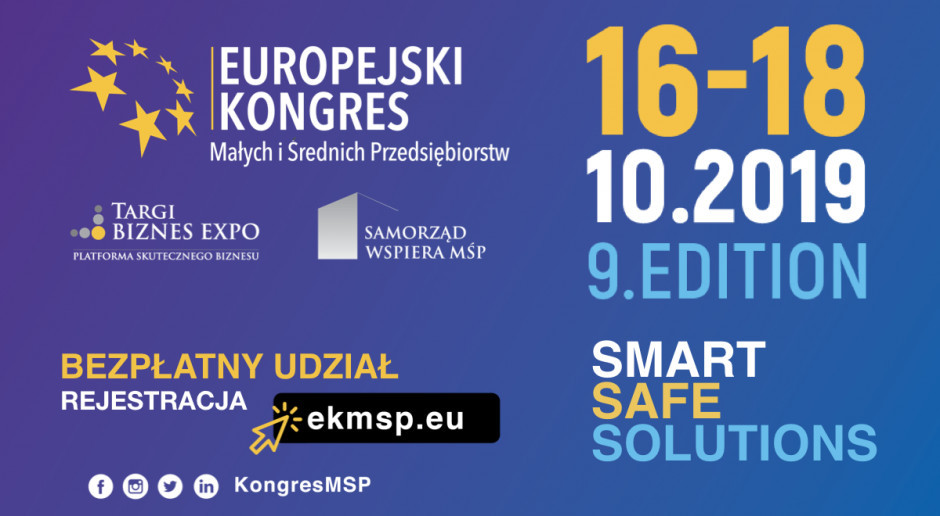 THE MOST IMPORTANT MEETING OF SME COMPANIES IN EUROPE!
9TH EUROPEAN CONGRESS OF SMALL AND MEDIUM SIZE ENTERPRISES WILL TAKE PLACE ON 16-18 OCTOBER 2019 IN INTERNATIONAL CONGRESS CENTER IN KATOWICE.

Small and medium sized enterprises are the most important sector for Polish economy, that’s why we made them a main topic of European Congress of Small and Medium Sized Enterprises. The most important people in our country, representatives of science, politics, economy and foreign delegates of the Congress will speak about the possibilities and challenges which faces entrepreneurs.

The European Congress of Small and Medium Sized Enterprises have it’s place in the European events dedicated to economy. During the three days of Congress we planned several dozen discussion sessions and workshops and meetings, in which will take a part national and international experts.

The last seven editions of the Congress gathered many representatives of business, science, politics and from the economic sphere. They were discussing about the chances and barriers blocking the development of micro, small and medium entrepreneurship.
– We filled the empty space in Europe. We are proving that, the reflection about the issues of SME’s is very important for Poland and Europe. In Poland we have 1,7 mln acting companies in which 3800 are big companies. The range of the problems: organizing them and represent their standpoints in talks with government including self-government are the biggest challenges and tasks which stand in front of the Congress – said Tadeusz Donocik, President of Chamber of Commerce and Industry in Katowice, Chairman of the Program Council of the Congress.

Participation in the congress is FREE!