Mandatory item on the map of business events 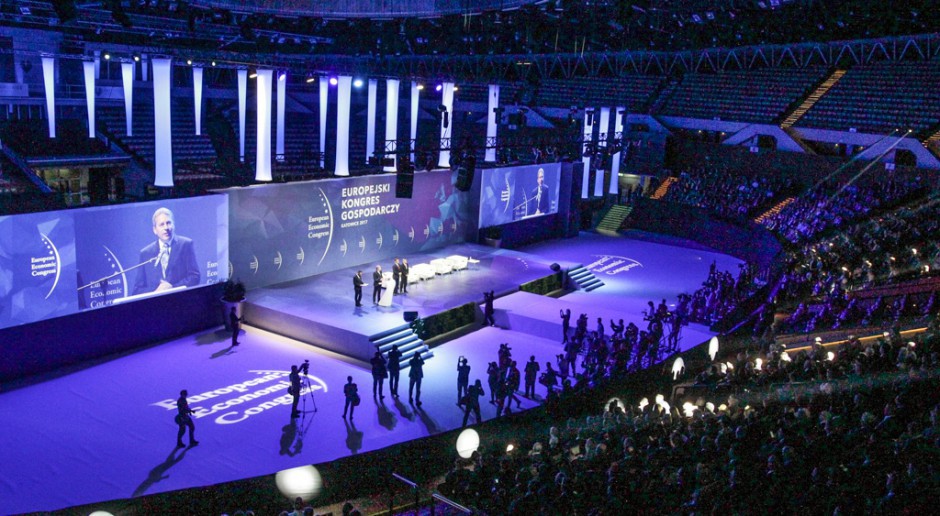 This year's European Economic Congress had a record attendance. The largest business conference in Central Europe attracted 9,000 people to the International Congress Centre and Spodek. Over 90 percent of them declared they would come back next year. Thousands of young people participated in the second edition of the European Start-up Days and the third edition of the project, Leaders of Tomorrow.

“Each year the European Economic Congress has been growing in importance domestically as well as on a European and global scale”, says Wojciech Kuśpik, EEC initiator, CEO of the PTWP Group. “Extending the program with accompanying events, dedicated to young people and innovative businesses, has expanded the horizons of the event. The positive perception and again record attendance convince us that we have been going in the right direction”, he adds.

As in every year, the audience, panellists and partners took part in a satisfaction survey among the participants of the European Economic Congress 2017, held on representative samples by the research institute BCMM – marketing surveys. As many as 93.2 percent of the audience and 91.8 percent of panellists declared their attendance in the next year's edition of the Congress in 2018. The participants appreciated the space where the European Economic Congress is held and found it a major advantage that the event is held in the International Congress Centre in Katowice and in Spodek. A positive opinion was expressed on communication with the participants (before and during the event), the registration system and the standard of the conference rooms.
“We consider the European Economic Congress as a key event of its type in Central Europe. For foreign businessmen and representatives of administrations, the event is a great opportunity to meet Polish partners and follow the most recent trends in the economy as well as in science, research and innovation. One of the key subjects during this year's Congress in Katowice was an event devoted to start-ups and scale-ups which was attended by about 2,500 participants”, said Petr Darmovzal and Renata Romanová, counsellors from the Economic and Trade Department of the Czech Embassy.

This year's edition of the Congress covers 132 sessions with the attendance of over 800 speakers. Among others, the leading topics include: a new idea for Europe – political transformations in the European Union; the economy after Brexit, and the likelihood of other exits; crisis as perceived by liberal capitalism; hierarchy of values in the economy at the age of new generations of employees; the 4th industrial revolution – how to develop industry using the latest technologies and on the basis of digitisation; investment at times of instability – risks, barriers, courage and profits.

The agenda of the Congress also included sessions on such fields of the economy and public life as: finance, innovations, technologies and man, power and resources, mining and metallurgy, management, self-governance and regional politics, infrastructure, the health market, transport and logistics, construction and real properties and global economic co-operations.

“The presence of decision makers and prominent experts at the Congress supports an in-depth discussion of major issues related to energy policies, a look at energy-related problems from a global perspective and from the viewpoint of regions and individual countries. That is why Lithuanian politicians, ministers of energy and representatives of the largest power companies have been traditionally attending the Congress. For Lithuanian energy specialists, attendance on numerous panel discussions is a great opportunity to present their vision of energy policies. I would also like to stress that the Congress is a forum with bilateral meetings: at the Congress, Lithuania’s Minister of Energy, Mr Žygimantas Vaičiūnas, had a meeting with Minister of Energy Mr Krzysztof Tchórzewski, Under-secretary of State in the Ministry of Energy Mr Michał Kurtyka and CEOs of Polish power companies – Mr Henryk Baranowski of PGE and Mr Piotr Woźniak of PGNiG. Separately, I would like to stress the meeting of Minister Žygimantas Vaičiūnas with prominent experts, politicians and representatives of Polish media. With especial satisfaction, I would like to mention the attendance of Prof. Jerzy Buzek. In Lithuania, we see a great potential for further constructive cooperation in the power industry. The annual European Economic Congress supports the cooperation and establishing of new contacts”, says Šarūnas Adomavičius, Ambassador of the Republic of Lithuania to the Republic of Poland.

“The European Economic Congress is an exceptional place with a friendly atmosphere supporting discussions despite the diversity of themes, views and subjects. For me – as a representative of the financial sector and an active participant in digital transformation – a major debate was on the digital economy and digital society in Europe. The meeting was attended by a diversified group of representatives of the EU, Polish authorities and the markets (experts of almost all sectors operating in Poland). Obviously, at the Congress the aim is also to develop relations with potential customers and partners. It is hard to mention any immediate marketing and image-related benefits – those come over a longer time; but I am convinced that I will meet many people in my business activities”, says Joao Bras Jorge, CEO of Bank Millennium.
“Both the European Economic Congress and the accompanying European Start-up Days are great and much-needed events. An increasing number of people attend the largest business meeting in Central and Eastern Europe year on year and the agenda keeps expanding. This is a mandatory item on the map of economic events. We are happy that we can be actively involved in organising the event”, adds Brunon Bartkiewicz, CEO of ING Bank Śląski.

“Attendance at the European Economic Congress in Katowice, a place where dialogue is under way between the private and public sectors, is an ideal opportunity to present and discuss the impact of available ICT solutions on the existing business models and modern services like e-administration, e-education or e-health. We believe that an open exchange of experiences and cooperation between business and administration will support the effective use of existing and future technologies to develop Poland's economy, to accelerate digital transformation and to develop smart cities. At the Congress, we held a number of interesting meetings and discussions. We are convinced that the Congress format helps participants to achieve their goals”, says Marzena Śliz, director for public affairs, Huawei Polska.

“The European Economic Congress is an exceptional event that has become a landmark on the calendar of major business meetings in Poland. The debate “Investments first”, held during the Congress, was an opportunity to discuss the key importance of investments for today's economic system and labour market. We also touched upon the ongoing transformation from the traditional paradigm based on heavy industry towards a diversified and innovative 4.0 model”, says Tomasz Domogała, chairman of the supervisory board of TDJ S.A.

In the opinion of the audience, the Congress first supports useful networking in work and business and provides a broader view of economic trends and phenomena that supports business decisions. Panellists on their part additionally stress the importance of the Congress for the prestige and image of persons and companies involved in the project.

“I came to the Congress to present the OFF Festival project that I invented and that I manage. An event such as this involves various partners – starting from catering and ending with private culture sponsors. The European Economic Congress is a good forum to hold discussions with the latter. My meetings focused on presenting the project and discussing potential cooperation. I hope to be able to tell you about the effects a bit later”, says Artur Rojek, the artistic director of OFF Festival.
The European Economic Congress was again appreciated by local government representatives, for whom the event is also a platform to establish cooperation with investors.

“The European Economic Congress is no doubt a great opportunity to show the development potential of tourism in our municipality. Stanica Kamińskiego (Kamiński’s watchtower) and the adjacent area was the leading subject. The goal was achieved. Multiple offers have been received. Now we can begin work on preparing paperwork for investors. We heard lots of interesting advice on the direction Brenna should be heading in. We also promoted the entire municipality of Brenna. And we are very happy about that”, says Jerzy Pilch, head of Brenna.

The European Start-up Days was the second iteration of an event accompanying the 9th edition of the European Economic Congress; a space for open dialogue between start-ups, investors and business support organisations.

“A combination of the start-up competition with such a high-ranking event like the European Economic Congress is an exceptional opportunity both for young companies and for enterprises with a consolidated position on the market”, says Magdalena Wąsik, representative of the Gradis start-up. “At the same time and in one place we could witness a meeting of creativity, young, often bold energy with long-term business experience and keen willingness to invest in diversification of business activities. The Gradis start-up was visited by Maroš Šefčovič, Vice-President of the European Commission for Energy Union, who became very interested in our solution. Reduction of energy consumption and CO2 emissions are among the European Union’s priorities. We have been invited to continue discussions on the implementation of innovative design and control of street lighting over the entire EU”, adds Magdalena Wąsik.
The European Economic Congress and the European Start-up Days 2017 – via TV, press, radio and websites – were covered by over six hundred journalists representing 150 media sources. As a result, there were almost 5,856 publications in the Polish media that were related to or mentioned both events. The advertising equivalent or the amount that would have to be spent on advertisements with the same space and air time, estimated as of 3 June 2017, exceeded PLN 30 million in case of the European Economic Congress and PLN 5 million in case of the European Start-up Days.

“The European Economic Congress in Katowice is an event that in recent years has become one of the most important meetings for representatives of business from Poland and Central Europe. It is here that the latest trends can be followed in various sectors, crucial for the economy, which may be helpful in market understanding and development of new strategies for company development, as well as those related to marketing. Representing the hotel business, I get an opportunity to follow its growth, and not only on the regional market. Demand for new, top quality hotels and hotel services in the Silesian agglomeration is one of the effects related to the organisation of such events as the European Economic Congress. The business melting pot provides the impetus to develop new quality”, says Maciej Jaglarz, a Silesian businessman and owner of, e.g. Altus in Katowice.